Our cattle are Sussex and British White, two of Britain’s oldest native breeds. In grazing the chalk grassland on the Wye National Nature Reserve, they play a central role in maintaining habitats for a wide range of rare and endangered plants and animals. The cattle live a stress free life on the Downs, before travelling to a local, family run abattoir where the beef is hung for three weeks to allow the full flavour to develop. 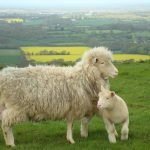 Our lamb is produced from the WCF flock of Poll Dorset/ Dorset Horn sheep (The same breed, but the polled variety having been selected to breed without horns). We also have a small flock of Portland sheep, an ancient rare breed from which the Dorset Horn was developed.

Each box contains half a lamb: leg (halved), shoulder (halved), loin and chump chops, cutlets, breast (boned and rolled or minced). Priced at £6/kg, a half lamb box weighs around 9 kg. 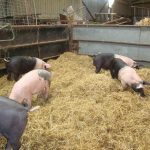 Our pigs are two traditional English breeds, Berkshire and British Saddleback, purchased as weaners from local breeders and reared on a diet rich in outgrade vegetables from Ripple Farm Organics.

Each pork box contains half a pig; leg (halved) shoulder (boned and rolled), chops, and sausages (lots of!). Priced at £6/kg, each box contains about 16kg of meat.

The pork box lends itself to being split equally two ways, so if you would like pairing up with a ‘pig pal’ to share your box with, indicate this on the order form.

Seasoned, barn-stored logs are produced by people carrying out their community payback with WCF, providing training and increasing employment opportunities.

WCF logs are delivered to your home in wheelie bins, meaning we can get them right to your log store. Stacking service available. Price is £20/bin.

We provide chestnut for woodstoves, or mixed hardwoods for open fires.

At certain times of the year we have Farmyard Manure (FYM) available, usually for a 2-week window when the cattle yards are being cleared out. Watch this space for more details.